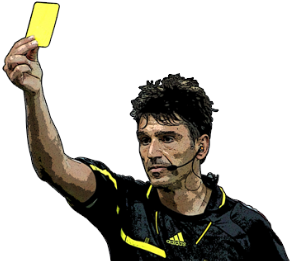 It's not about what you say, but how you say it

As referees, we have a tough ride in general; particularly those operating at the top level with English Premier League officials being perhaps the most ‘scrutinised’ of all. Some parts of the tough ride we bring upon ourselves, it has to be said. The most impressive (and most successful) referees are those who are able to communicate efficiently and effectively with players, without taking on an air of superiority.

How do I know? What makes me qualified to say that?

I am an ex-player with 15 years in the game and I have been a referee for the past 4 years, both in the UK and US.

I came across thousands of referees whilst playing and have since worked alongside many more and there is no question, in my opinion, that the number one trait that sets the exceptional referees apart from everyone else is their ability to relate to and communicate with players.

It is worth remembering that the majority of your job as a referee is about man-management, of which communication is a vital factor.

Remember that communication is a two-way process. Sending and receiving information is a very important aspect of all competitive sports, none more so than football and effective use of this process will make things much easier for you as a referee. Ensure you are not just a sender.

Every time you turn up to officiate, regardless of whether it is a kids game or professional match with thousands of people watching, always arrive with a smile on your face. I do this, every single time I officiate and that is largely because I genuinely enjoy being a referee. So should you; if not, you should probably consider hanging up your whistle.

Being happy, positive and smiling is actually a choice anyone can make. Make the right choice.

Try to establish a rapport with captains and players whenever the chance arises. You don’t need to be a comedian but if there is something witty or funny you can think of to say, even if the atmosphere is tense, go ahead and say it. It might just raise a smile and relax everyone.

You don’t need to walk around giving high fives to players but if you can come across as a genuine human being, as opposed to a robot following strict protocol, players will be more inclined to cut you some slack, even if you make a poor decision.

The game is not about you; it is about the players. I attended a referees’ training course once where the instructor (a respected ex-FIFA referee) opened with the words, “When you step onto that field, you are God.”

Remember that you are dealing with players, equals, not servants. Treat them that way and you’ll likely get a positive response. Leave your ego in the changing room!

Here’s a secret; players recognise that we are human beings and therefore they know we are going to make mistakes. Don’t go blubbering an apology every time you get something wrong; you don’t want to come across as weak.

However, if you make a decision and play restarts then you realise it was the wrong decision, don’t be afraid to have a quick word in the players’ ear next time they run past. Something along the lines of, “Sorry number eight, that was probably a foul, I missed it as I was unsighted.”

Being told we are/were right is something we all appreciate. Even though you can’t turn back time, players will appreciate your honesty and the justification that they were right.

Instead of simply saying “go away” the next time a player questions a foul, if the speed of the game and situation allows it, give a quick explanation along the lines of, “Yes you won the ball number four but you went through the back of his leg first.”

This kind of thing goes a long way with players and if you say it with confidence and a smile, 99% of players will nod in agreement and just get on with the game. I don’t believe you can ever have the problem of talking too much when officiating matches. Sure, don’t attempt to strike up conversation during games about something unrelated to the match itself; players are not there to have a chat and cup of tea. However, talking a lot is much better than not talking enough.

Being approachable is a great trait for referees to have. I am always approachable on the field and make a point of being so. This does not mean you have to act like a counsellor and sit down to discuss every single decision in detail. It does mean that you should allow players to talk to you and approach you (providing they do not do so aggressively) without waving them away like little children. Be accessible and receptive to players as much as possible without allowing the flow of the game to be disrupted by a barrage of comments.

Communicate With Players ‘On Their Level’

You don’t need to be dictatorial or condescending, otherwise you will not get respect from players. No player wants to be spoken to like a child and there is absolutely no need for you to use that kind of approach or tone.

We, as referees, are not on the field to be anyone’s best friend or win popularity contests; however, it is worth remembering that we are not there to make enemies either so I don’t see any reason why you can’t have the odd joke with players and talk to them as equals as opposed to lecturing them.

Body language is the silent communication tool but is extremely important. Studies have suggested that we communicate roughly 55% through body language, 38% through the tone of our voice and 7% through what we actually say. Good communication skills (including the effective use of body language) influence player perceptions of fairness and correctness, there is no doubt about that.

With this in mind, it is vital that you work on your body language and tone, as well as what you actually say.

You Don’t Have To Be A Hate Figure

I believe that you can be a successful referee and still be a well liked member of the sporting community. You don’t have to be the stereotypical hate figure that most people perceive referees to be. “Don’t be a referee unless you are comfortable being disliked by everyone,” I was told by many people. I have not found this to be the case at all and neither should you. Memorising the Laws Of The Game is not really that hard. Communicating effectively is more difficult. Focus your time on perfecting the latter.

Try to implement some of the concepts above during your next game. Watch and listen to player reactions. You can judge whether implementation of the concepts makes things easier for you or not.  I already know the answer.

Paul Spacey is an ex soccer player, now USSF and FA qualified referee as well as being a private coach and author. His eBooks (including ‘Effective Communication For Referees’) are free to download on his website www.paulspacey.com.

Why Effective Communication Is The Key To Being A Successful Football Referee!

The following text is a guest post written by Paul Spacey, former player, current referee and private coach as well as owner of a very insightful website you should definitely visit. As The Third Team is about to put more stress on psychology and prospering personality standards in modern football refereeing in future, this is an optimum start to approach this issue.